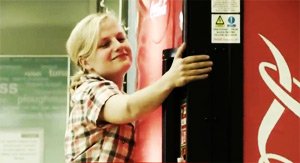 This time in the UK. And they got red velvet cupcakes instead of pizza. But pretty much the same, smiles and all, as the original video. The machine even got a group hug from the college kids to say thank you.

One useful point from the original video (and we suspect is true for the follow up), is that they used no advertising to launch the campaign. The original Happiness Machine video was simply posted to Coca-Cola’s Facebook wall.

No ads, no promotion partners.

Many “viral video” hits are not just hits because of their content, but have plenty of online advertising out there to help them along the way. But if you focus on building up an audience on your blog, on Facebook, on Twitter, etc. – they can be major assets when you want to get a message out. Perhaps even replacing major online media buys.

The original American version of the video was produced by Definition6 in Atlanta.